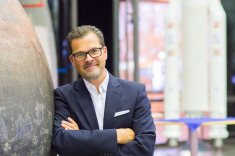 As Managing Director of Space Sector of the Saudi Space Commission (SSC) , Frank supports the build-up and operation of the Space Programmes of the Kingdom of Saudi Arabia.

Frank spent 19 years in the European Space Agency (ESA) and  he built the largest space entrepreneurship network in the world (ESA BICs). His ESA team initiated over 370 industry transfers and aided over 1,300 start-ups. Additionally his office supported over 1,000 downstream business cases. He supported the exploitation of ESA Intellectual Property and promotes the Directorate of Telecommunications and Integrated Applications of ESA, which has additionally supported over 1,000 downstream business cases. His team aids industry to work with ESA, venture capitalists to connect to start-ups and helps new space companies into orbit and to the Moon.

Before joining ESA, Frank held the position of Founder and CFO / COO for an IT start-up, headquartered in Munich, Germany. The company was merged with CANCOM SA. Frank also spent seven years at Apple Computer, now Apple Inc., as an account and sales manager, responsible for Central Europe. He was positioned in the Netherands,  Germany, the USA and the Czech Republic.

Frank holds a degree in Industrial Engineering, is married, has two sons and lives in Riyadh.

Being genuinely passionate about the importance of human space flight and the Space Programme, Frank believes that “a society that stops exploring stops progressing”.

The successful framework has been adopted by CERN, Fraunhofer, Airbus Defence and Space, other space agencies as well as the government of Singapore. Frank as created the brand ESA Space Solutions which is present in over 70 locations across Europe and beyond.

The best is to check out my linkedin profile.  linkedin.com/in/frank-salzgeber